Tony Nicklinson wanted to die. Ever since a stroke had locked him into his own body, reducing communication with the outside world to decoding his eye blinks, he'd wanted to die.

So badly in fact, he’d gone to the High Court to allow his nearest and dearest to kill him. When the Court refused this, such was his disappointment that several television commentators reported he seemed to have lost the will to live. In fact he died a week later…

Now you see that we have to stop here and consider what these TV people were actually saying (if indeed it can be unpacked).

They were saying that he was so disappointed with not being allowed to die – he lost the will to live and died.

Constantine was in a bit of trouble. The Roman Empire was getting fat and lazy and very very self-indulgent and the Hun was not only at the gate - he'd applied for the position of Gate Keeper, putting in a very good CV listing all past work; murder, arson, rape (cattle) and plunder (women) and qualifications; murder, arson, rape, kidnapping, accountancy…etc…etc.

Then Constantine was told about this luny little sect, the Christians (his only previous contact was watching wild animals lunch on them). They, he was told, were the only people who got to work on time (Coliseum stoning practice) and kept their word (God's) while pressing nose to grind stone (average two Ohhh levels) - this unspeakably serious, nutty, humour free sect.

But times were bad and the Empire was heading for the Swanee and Constantine needed a populace imbued with similarly aimless and cost free focus and dedication, so sent out a Big Edict (six cylinder supercharged) that EVERYONE in the Empire was now a Christian - since yesterday! and so were to pull themselves together, get off their arses and down the job centre.

And it worked (for a while anyway) but the downside was that everyone was now a Christian with all the cringely smug '...look at me as well as listen' narcissism we all know (and don’t love) so well.

Seven hundred years later, Abdul The First (to the camel) had a bit of an empire in the Near East (Israel, Palestine, Jordan, Syria, round the Dead Sea) that was going the same way; no one got up until daybreak, bingeing (tea) all day and always late for the camel auction (you don't want an ugly one!).

So Abdul, casting around (stones) for a solution, got a Greek in to read some history to him - and here Constantine seemed to be The Man. But Abdul needed a new burning cause to inspire his citizens, the baking Bedouin as he’s didn’t want to go down the Christian road again and the Jews - well they were just too much, always wailing about something or other…

So when he heard of this guy Mohammed, local wheeler dealer who'd come up with the ultimate sales pitch; “There’s only One God and I've got his Franchise.” Abdul thought about it for a nanosecond, 'Well it worked for old Conny and the Womans..!' (he'd a bit of a lisp) and so declared that everyone within his remit was now a Moslem (Yes, since yesterday!) and to make the point, knocked out a load of coins in Mohammed's name (its first ever recorded mention) and the good thing was that he didn't have to pay him any royalties or even split a pitch because Mohammed was safely dead these fifty years.

But then it didn't go too well for Abdul the First and he was replaced by Not Abdul the First who, looking around in much the same way after the smoke cleared (he lived above a herring factory) thought, “Well I didn't think much of Abdul the First, but his CC (crowd control methods, Religion) certainly seemed to work” and so went straight to it and had more coins minted, again featuring Mohammed...!

So there you have it; both Christianity and Mohammedism came about for the same reasons, two pagan fuhrers needing a quick social fix – a bit of crowd control, so opted for the nearest crowd pleaser... all they cared about was, 'did it work..?'

And the laugh was that Mohammed hadn’t even heard of Mecca, let alone ever having been there..! He was a good old Dead Sea boy through and through.

You read it here first..!

I was recently ‘kettled’ by a group of people outside the Co-oP in the North End Road, Fulham. They were surprised when I asked were they Jehovah’s Witnesses.

“How did you know..?” the leader asked, a middle aged woman in a fake fur jacket.

“From the way you jostled me, it was either that or Romanian pickpockets – but they'd be better dressed” I answered.

Anyway they launched into a diatribe about our lord and his single minded determination to save me.

“Sorry, don’t do God, don’t need him,” I said, “I’m a grown-up and so take full responsibilities for my actions,” (bit of a wild claim, the grown up bit).

There was a moments silence and then one of them came back, “Do you have a family bible?”

When I conceded there was one, they looked at each other in wild surmise – well, mild satisfaction anyway.

“There you are,” said their leader, the lady in the coat. “You wouldn’t have one if it wasn’t useful” She ended on a high note and they all nodded to each other as if some clever point had been made.

I remain unshaved and unsaved.

This meeting actually happened.
Posted by Keep an eye on the man at 00:27 No comments:


My friend Mike Walsh, along with his writing partner, Don Jordan has just brought out a brilliant new history of the execution of Charles First and its consequences for the Regicides – those responsible for his death. It’s called The King’s Revenge and it’s a page turner simply because, as the obvious result of thorough and painstaking research, they transport you back to these events in such a close up, detailed yet lightly written way - it brings them alive.
I have not had such a feeling of the day-to-day reality of a nearly forgotten period since reading a book a few years ago about the murder of Christopher Marlow, called ‘The Rekoning’ - which took you back to the late Tudor/Early Stuart period in the same way that Mike and Don’s book returns you to the middle of the catastrophic reign of the Stuarts.
I call it catastrophic in the sense that if the Stuart’s had achieved the secret ambition, common to them all from Mary onwards,  to turn the United Kingdom back to a Catholic Kingdom, there would have been no Industrial Revolution and so no Great Britain – and I say this from a Highland Scottish background whose ancestors regularly and faithfully  turned out for this lost Stuart cause, their obsessive attempts to restore themselves to the British throne (one, Alexander Robertson showed up SIX times, the first when he was sixteen and the last when he was so old, over eighty, he had to be tied to his horse).
The thing about the late Stuarts (from Mary onwards) was that they had no real friends – or rather wanted no real friends in the sense that no one was safe in the furtherance* of their ambitions. Even Charles the Second, the Good Stuart, would throw his friends and his integrity to the wall when this obsessive ambition demanded it - and their secret objective throughout this period, their Holy Grail, if you like, was the creation of a standing army to impose their secret Catholic ambitions on Britain; a bit difficult to justify on an island. A standing navy maybe but then navies weren't much good to them, they can’t sail up the High Street to murder the citizens – but anyway, getting back to The Kings Revenge, if you’re at all interested in history or would like an enthralling and personal story of relentless pursuit and revenge, this is the book for you. 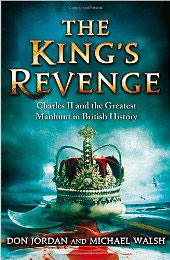 Sorry about the use of ‘furtherance’ – won’t happen again.
Posted by Keep an eye on the man at 07:26 No comments:

BRING BACK THE DEATH PENALTY

There are several reasons for bringing back the death penalty – in ascending order of priority;

….and THEATRE, the best reason of all - it would add greatly to public entertainment; the frantic last minute appeals to an unmoved Home Secretary then the silent early morning crowd in the rain outside the prison gate, waiting for the death notice to be posted - and afterwards a splurge of paperbacks from broke journalists/writers, '...did he or did he not do it?' (especially if he is a she..!)

...and it would give the elfs and fawns in Hampstead Garden Suburb another chance to hyperventilate while clutching at the drawing room curtains...
Posted by Keep an eye on the man at 05:32 No comments:

Back again and although I say it myself, this blog is rather unique - in three years I've not had a single outside viewer..! Not one..! But all that is going to change - I've taught myself to touch type..!
Posted by Keep an eye on the man at 17:44 No comments: