Met Mandy and Jasper at the Arts Club. I got there first to sign them in, Mandy was going to be late anyway as she was first going to the Saachi Gallery with Duncan, her new computer date. Jasper was also going to be late as he was going to a different exhibition, one of Tomasina (his wife's) late grandfather's paintings. I declined to accompany him after a (long) seconds thought. They were evidently all big abstract paintings of crystals.

I sat out in the garden - it was a nice day, and read some of the Club's newspapers - well, the Guardian because I can only read it as long as I don't buy it* and the fucking Mail because it had a headline about how American hedge fund traders had bought Britain's biggest care homes (for the elderly) company and then, after stripping it of its assets, had driven it bankrupt.

Jasper arrived first, then Mandy and eventually my girlfriend Anne. I made a joke about Anne's newly acquired weight, acquired since we got back together again, asking her was she pregnant - She wasn't amused.

Anyway the conversation got round to poor Ina Granger's funeral (Jasper had gone) and what a total cunt her husband Ian was - which then got on to the past and to Jasper's father, Tony Hawker.

We eventually all had to go, Mandy back to Brussels and Jasper to the cinema. The rest of the evening I spent in a deepish depression; either from talking about Tony (Jasper's father) and the past or from Mandy correcting everything I said - no wonder she has, despite being beautiful, trouble finding the right man - right as in having to tick every box on both sides of an A3 sheet. See the very bad pic of Mandy below, snapped on skype.

Stopped reading *The Guardian after about fifty years, when I was finally pushed offside by a creepy New Labour columnist called Kettle, suggesting that Peter Mandelson should be the new head of the IMF. Mandelson should be doing time - for me he's the maximum reading on any public corrupt-o-meter. 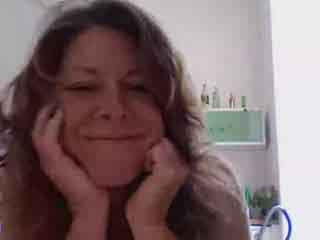